"You're Dead: So What?"; Author says Telling Their Stories Matters 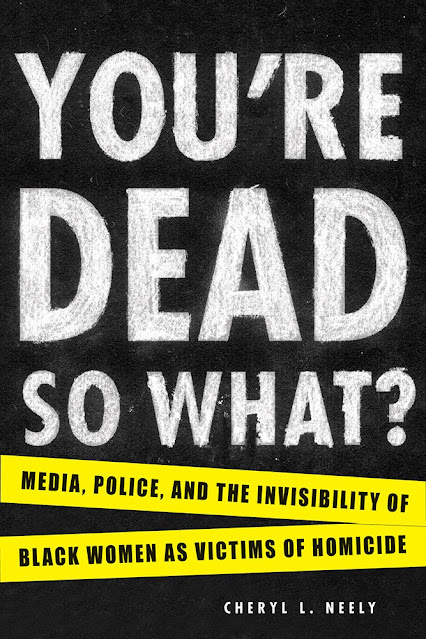 Cheryl Neely can remember just like it was yesterday, laughing and talking while riding the Grandriver Avenue bus with her childhood friend Michelle Jackson and her own two sisters, while leaving Murray-Wright High School in Detroit. Seeing Michelle was part of her daily routine. After school Cheryl, Neely’s sisters and Michelle would all meet at the bus stop to go home.

On Tuesday, Jan. 24, 1984, the lives of Neely, and her sisters Suane and Cassandra would change forever. That was the date that Michelle, 16, was murdered and raped while on her way to school.

"In journalism, there’s a narrative of black people being perpetrators of crime not victims. When we are portrayed as victims, somehow the media intimates that we had it coming..."

Many years and miles away, Neely, now a sociology professor, can still recall in vivid detail her friend’s murder. Remember, like it was yesterday how that next morning Michelle’s body was found by family members in an abandoned garage, the flowered, white thermal tights wrapped firmly around her neck. Michelle was an honors student at Murray-Wright High School in Detroit.

Recently, Neely, 54, described her friend as an attractive popular student. Detroit homicide Sgt. Kenneth Day told the Detroit Free Press in 1984 after the slaying, "Michelle was well liked by everyone, she was an excellent student and never had any problems that we are aware of."

The murder of her friend had a profound impact on Neely, she admits. In fact, she vowed never to forget. In 2015, Neely published a book “You're Dead―So What?: Media, Police, and the Invisibility of Black Women as Victims of Homicide,” examining media bias in reporting homicides of black women, and law enforcement's failure to thoroughly investigate the deaths of black women.

Even as a teenager back then, Neely says today that she knew something was wrong with the way Michelle’s case was being handled.

“At 18, I was taken aback at the lack of urgency and outcry from the community, press, and law enforcement for Michelle’s murder.  The press provided little attention to Michelle as a victim,” said Neely.

It was not an isolated incident, according to Neely who teaches at Oakland Community College.

Neely blames what many critics say is a lack of media attention to the murders of as well as well as the misrepresentation of black women on a system laden with intrinsic biases.

“It has everything to do with how society views black women,: she said in a telephone interview. “We’re not seen as valuable and we’re seen as unrapable as victims of sexual assault.”.

In her book, further contends that white women are depicted as victims, while black women are blamed for the violence committed against them.

“Historically, black people have been demonized as a criminal element. In journalism, there’s a narrative of black people being perpetrators of crime not victims. When we are portrayed as victims, somehow the media intimates that we had it coming,” said Neely.  “In the news reporters will say the black victim was at the wrong place at the wrong time, associated with the wrong people, or had a  history of sex work and drug abuse.”

Cheryl W. Thompson, an African American investigative correspondent for National Public Radio and the first Black President of the Investigative Reporters & Editors, agrees that media bias is a vital issue when it comes to news coverage of black people.

“Crime that happens in the black community has always been underreported, I grew up in Chicago,” said Thompson, a native South Sider and former longtime Washington Post reporter.  “It’s when we’re the suspect that the stories are always reported, but when we’re the victims not so much, unless you’re a victim who has name recognition,” said Thompson.

Indeed critics argue that when black women are victims of homicide, they are often stamped by police and the media with belonging to the streets. In Chicago, 51 women since 2001 have been strangled, most of the black, according to police. In only one slaying has someone been charged, though police said Arthur Hilliard, charged in January with the 2017 murder of Diamond Turner, is not a suspect in the other 50 slayings.

The Alexandria, Virginia based Murder Accountability Project has determined by a computer algorithm that the other women were victims of at least one serial killer. The report cited Chicago police and the Cook County Medical Examiner’s office as reporting that “many victims had histories of prostitution, illegal drug use, or both”.

That is too often how many black women who are victims of violent crime or homicide are characterized, even they weren’t, observers say.  The effect of being given that title is that it can immediately discredit, dehumanize and devalue these victims, which plays a key role in the extent to which these cases are investigated or solved.

“If the 50 women are being identified as sex workers, then they’re even lower in the minds of some people in terms of where the police department is going to put their resources,” Thompson said.

Leon Dash, a Pulitzer Prize-Winning journalist who worked formerly for the Washington Post, said it’s normal for the police to act in such a way in regards to crimes committed against black women.

“Well, that’s convenient and easy for them to do because they’re women of color for the most part,” said Dash, Swanlund/Center for Advanced Study Professor of Journalism, African-American Studies and Law at the University of Illinois at Urbana-Champagn. “The reason primarily is because police really aren’t interested in investigating these murders and preventing future murders from occurring.

“They characterize the women on the margins of American society, which means fewer people will need to care for them except for their families and friends,” Dash explained. “What the police are basically saying is, ‘We really don’t have to pull resources in solving these murders.’”

The disparity in the news media’s reporting between both races for Neely boils down to  dollars and cents rather than moral right and a sense of fairness..

“If you were to ask the media, one of the reasons they will tell you is economics,” Neely explained. “Most of the subscribers and readers of their newspapers and watchers of their programs are white people. So reporters write stories that white people want to talk about. This kind of reporting perpetuates the idea that black victims have no value.”

It is with this understanding that Neely carried the plight for justice for her slain friend. Decades after Michelle’s murder, Neely published a book inpsired by her love for Michelle and for her irrefutable truth about the way the case of murdered black women are treated by the news media and by police.

Police were moved to action after reading her book and reopened the case. Then in January, Michelle Jackson’s killer, identified by the authorities as Kennith James Dupree, was apprehended and convicted.

“They reopened her cold case and launched a focused and vigorous investigation that solved this crime after 35 years,” Neely wrote in an email. “It is a gift to her still grieving family that I can scarcely began to sufficiently articulate.”

But along with the memories of her slain friend, she at least has the solace that her killer is now behind bars, sentenced to 50 to 100 years, and at least a semblance of justice finally served.