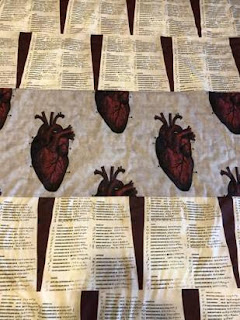 ENEE ABELMAN SITS IN her St. Petersburg, Florida home, sewing together yet another quilt. A resident of Florida, she’s effectively been quilting all her life, and has gone through this process countless times. This is no ordinary project, however.
She’s piecing together the names of 51 women who were brutally murdered in Chicago without much mainstream media or political attention. So, how did the 63-year-old hear about this case based in a city over 1,200 miles away from her? The answer lies within the power of social media.

On June 6, 2019, Beverly Reed Scott, a self described local community activist, created a Facebook page titled “50WomenGone” following the murder of over 50 women in the Chicago area. These victims shared a number of traits: they were women of color who were strangled in alleyways before having their bodies dumbed in trash cans or abandoned houses. Most of these killings did not make the headlines, however, with the media mostly failing to cover what had happened in much detail.

“My sister-in-law and brother-in-law were both detectives, so I know just how much a cold case can impact a family,” said Abelman. “Not only do they have to deal with the death of a loved one, they are denied any sense of closure by not knowing who did it.”

She decided to help by doing something she does best: quilting.

“I’m a quilt maker. That’s what I know how to do,” said Abelman “I asked her to send me the names of the women, and I then used a process where I had the names printed onto fabric. I used a couple of other fabrics I knew were made by women as well, and then got all the images into my computer. I laid it out and got some other images like a heart beating, and after getting everything made, I finished up by stitching all the pieces together.”

The quilt humanizes the victims in a way that makes them much more than a statistic, which is incredibly important.

“There’s something different to seeing names on something real and something warm instead of just seeing names on a screen or a list,” said Abelman. “A quilt is embedded in life, as you have it everywhere around you. When it’s missing, then you notice that it’s gone. It stands for warmth, protection, and staying safe.”

The quilt is a direct result of the 50WomenGone page, which has scores of followers after about a year of being active. It might not seem like the largest number, but that’s more people who have become informed about the case than before, and it's only the beginning.

Social media are often criticized for their potential negative impact. But its defenders and proponents say there's still plenty of potential benefits to be gained by relying on social media. Among them is using social media platforms to raise awareness of a social justice issue.

“Social media is a positive tool that can be a powerful force, and it could be much more powerful if we became organized,” said Michael Pfleger, a 70-year-old nationally renowned Catholic priest and community activist who has been outspoken about violence in Chicago for decades. “We've used social media in the fight against violence and guns to educate and expose information either not being told or covered up to keep putting pressure on the number of lives being lost, and to inform about rallies, demonstrations, or events.”

The quilt is one of many memorials made to honor the lives lost due to homicide in the city. Chicago has almost always had a violence problem, with almost 500 murders taking place in 2019 alone. To raise awareness of these killings, people have placed everything from teddy bears to liquor bottles to gold spray-painted sneakers across the Windy City to remember the victims of such crimes.

Greg Zanis, a 69-year-old retired union carpenter (now deceased), once created around 700 crosses to place across Chicago, honoring those who were murdered in the city.

“This was to show my love for those in Chicago,” said Zanis in an interview last spring. “I had skills in carpenting, and I tried using the best materials to make it beautiful, some of which were donated to me by people in the city. Every cross had a name and a photo put on it to humanize the victims. I wanted to show family members that people care, and that they can have their moment.”

The mainstream media may never fully cover what happened, but pages like 50WomenGone can go a long way in making the public more aware of the case through the wide reach of the Internet.

“What comes from the heart reaches the heart, and my job is to reach their hearts, and to keep them engaged,” said Scott. “They might be gone in body, but we still have the responsibility to honor their lives.”

The quilt made by Abelman is just the start.

“The acknowledgement of these women has been removed, but putting their names on something soft and padded that brings warmth would show that these were real people, and not just descriptors,” said Abelman. “It’s hope that something can be pieced back together for these women who have been murdered.