Portraits of Life: Remembering "Jenny": Daughters Focus On Mother's Love, Not Her Flaws

By Arianna Thome
HER DAUGHTERS REMEMBER HER heart, how she lived and the way she died but most of all the way she loved. “I want a bra Jenny, I just want a bra,” a close friend had pleaded with Jenny, her daughters recalled. The circumstances weren’t great as living on the street makes for a life without many necessities. Except “Jenny” didn’t belong to Chicago’s mean streets, where addictions and other afflictions can consume beloved daughters and mothers whole.
Jenny had a childhood home where she lived with her mother in the Chicago Lawn neighborhood. There, she had food, love, and a safe place to go whenever she needed it, anytime she needed respite from the streets. Oftentimes, she chose to stay out. Sometimes it was to help a friend who was less fortunate, or to just keep them company from another lonely night.
_____________________
_____________________
“Our mom had her problems and everything. But overall she was a god in our eyes... She would do anything for us.
-Amber Mellas, Jenny's daughter
_____________________
_____________________
That was Jenny, short for Genevieve, her family recalls. So the story goes, that on one occasion, Jenny was caught for shoplifting a bra from a thrift store. Except the bra wasn’t for her. It was for the friend who had pleaded for a simple item of clothing to bring her some sort of comfort amid her hardship and lack. Jenny just wanted to help, her two eldest daughters Amanda Mellas, 27, and Amber Mellas, 25, recalled in a recent interview a day after another bitter anniversary in October that is forever signed into their memories.
“She would always give the shirt off her back to help anybody,” the daughters said of their mother, further describing her as selfless and always wanting to help those around her. Whether it was finding a way to get her friend that bra, or caring for a sick mother and six children, three boys and three girls, Genevieve Mellas loved helping others. She was good at it, the daughters said, although there was one person whom she often left neglected: herself.
A mother of six, Mellas was slain 12 years ago on an autumn Thursday, at age 32. Police discovered her lifeless body near a lagoon in Marquette Park, a belt tied around her neck, and partially clothed, the victim of a strangling, her case still unsolved.
“She had a whole family. It’s not like she was nobody, like a John Doe. She had a family. Everybody knew who she was,” said Amber Mellas.
And yet, in the more than one decade that has passed with no one yet charged in Mellas’ death—and lingering questions over her murder—what her children remember most is the life of a woman who was their mother. A woman for whom their love has never dimmed, even if she was unable to overcome her addictions and the intoxicating, if not often numbing, lure of the street.
“Our mom had her problems and everything. But overall she was a god in our eyes,” said Amber Mellas. “We would do anything for her, and she would do anything for us.”
Their mother’s life was not without travail. The daughters said that when Mellas was 18 and pregnant with her second daughter, Amber, she was cooking with frying oil when a fire ignited in a pan. Frantic, she ran with the pan outside in an attempt to put out the fire and the flaming oil spilled and covered her body. She suffered severe burns.
During her lengthy recovery in the hospital, according to family, she became addicted to the morphine given to help the pain subside. In time, she began to explore—and became addicted to—other drugs. A 2008 Chicago Sun-Times column by Mark Brown in which her mother Magdalene Mellas is quoted, says Jenny “graduated from PCP to crack cocaine to heroin.”
Despite Jenny’s addictions, which led her more and more to the streets over time, she always managed to make her way back home. Her daughters admit that it wasn’t perfect but say that even amid their mother’s battle with drug addiction, not a week went by without her coming home.
They don’t judge her for her human failings but instead acknowledge the fact that their mother was still young when she had them and had her own battles too. They remember the woman who gave them life and who loved them, whatever her faults, miscues or mistakes.
The eldest daughters still cherish memories of when their mother would tote them around the neighborhood in a red wooden wagon. Round and round they would go until they fell asleep. They also cherish the memories of walking to the gas station with their mother to get cigarettes and snacks, which Amanda and Amber explained doing as much as two times a day.
The daughters remember a pretty woman with bright blonde hair and deep blue eyes, and a smile that lit up the world. They remember a woman who could be the life of the party or the light in any room—a woman who was carefree and who opened her heart to all those around her.
And they remember the date, Oct. 9, 2008. 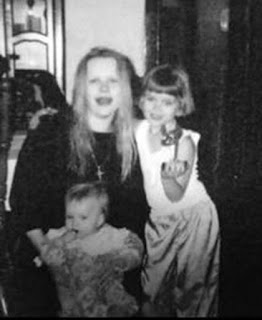 As the 12th anniversary of Genevieve’s death passed last fall, it was another year without answers, without anyone having been charged, without witnesses having come forward, and without justice being served. “My mother was murdered and she had a belt around her neck. They got fingerprints on the belt,” said Amber Mellas, “They said that was not enough,” she added, referring to police investigators. “They had DNA inside of her and that was not enough.”
Over the years, Jenny’s mother made it a point to bring attention to her daughter’s life and her unsolved slaying. Magdalene Mellas passed away in early 2019 with a broken heart. Her dying wish was that her daughter’s killer would be found.
Magdalene Mellas saw her daughter Genevieve as a kind of social butterfly, never one to stay in a place too long before she fluttered away—and unique and beautiful in so many ways.
That is how her family remembers Jenny, added Amanda, sharing a belief her family holds dear: “Now she flies with butterflies.”
And even if Jenny is no longer here, her two eldest daughters keep memories of their mother alive, choosing to focus on the most important thing. Not the fact that she was murdered but the fact that she lived and loved, and that she is also loved forever.
on December 28, 2020