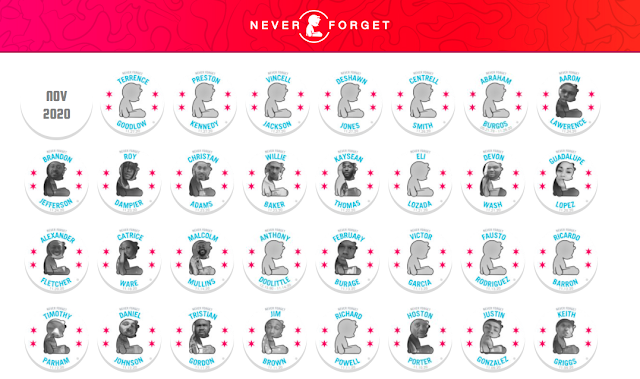 By Jules Banks
The Never Forget Chicago website shows rows of names and faces, each lined up in bubbles next to one another. Each displays a black and white photograph of a victim of Chicago violence, with details about their life and death only a click away.

Kelly Sarff and Antoinette Simmons, two of the 51 women whose murders remain unsolved in Chicago and are believed to have been committed by at least one serial killer, each have memorials on the page. Posted underneath Sarff’s memorial is a simple but grim detail of her killing: “She was 34 years of age when she was killed as a result of Strangling,” it reads.

Below the summary are posts from people who have visited the website:

“Love you Mama!” wrote user Amanda Witt. “Wish you were here! We’ll find out who did this to you!”

The chat underneath Antoinette Simmons’ memorial, however, is empty. The circumstances of her death are posted alongside the a baby blue icon, though absent of her photo, along with a plea to help authorities with any information leading to her death. The website is the vision of one man who hopes to help keep memories of murdered women alive.

According to Never Forget Chicago’s founder Maxwell Emcays, the website is a combination of a memorial to help families grieve and an informational page on each victim. Emcays began the project that would later be dubbed, Never Forget Chicago, while a senior at the University of Illinois at Chicago.

Emcays, who is now a full-time Chicago-based artist, said he was largely motivated by “the fact that plenty of headlines, murders would happen in Chicago, and then within a short period of time, no one even could recognize the name or have any information about it. It was completely as if it never happened.”

More specifically, Emcays said that the death of Derrion Albert, brutally attacked by an assailant on Sept. 9, 2009, and fatally hit in the head with a two-by-four as he walked home from school on the far South Side—which was captured on video—was a primary reason for the creation of Never Forget Chicago. Albert was one of the 461 people murdered in Chicago in 2009, according to the Chicago Police Department’s 2009 annual report.

The public’s reaction to the murder, which was at first widely publicized due to the viral video, and the manner in which Albert seemed so soon forgotten,  inspired him to create change, Emcays said.

“For me, the fact that people could forget Derrion Albert really put in perspective that there wasn’t a mechanism, a system or an idea, a way to really honor the victims,” he said.

On the site’s Facebook page, where the Never Forget Chicago community posts to friends and family, they also share gratitude to the organization. Qiana Haywood, a native Chicagoan, said that although none of those who appear on the site are her relatives or friends, she is still grateful for the organization’s efforts to help her community.

Haywood was introduced to the organization through a friend. Like many members of the Never Forget community, Haywood said the page offers a measure of healing for family—and Chicago communities in general.

“I like the fact that other people take the time out to mourn and draw paintings of our loved ones we lost,” said Haywood, referring to the graphics made for each individual.

The project began as an online memorial for four victims, but quickly grew. According to Emcays, he began to meet more victims’ family members, and that compelled him to widen the project’s purpose. He began sending T-shirts as gifts to the families, each with the words, “Never Forget…” and the family’s loved one’s name emblazoned across them. Emcays described this act of gift giving as a “starting point of grief.”

“It’s the mere idea that at least if we can’t acknowledge loss, if we’re not even starting at that point, how do we expect any change to come from it?” he said. “How do we expect to address it in any serious way?”

As the project grew, it became more difficult for Emcays to manually create each graphic for the site, as each took five to 15 minutes to make through graphic design and photo editing software. Working with a web developer, Emcays said he developed what he described as a “a back-end custom plug-in.”

That plug-in automatically creates graphics and posts with only a little manual input required. A general script is placed into the custom plug-in, which then creates the post and uploads it to the page, which he says helps maintain the site’s swiftness and accuracy.

Emcays has a handful of volunteers who help him run the organization, as he sends out T-shirts, notes, and birthday and holiday cards to countless families of individuals on his site every week. However, he added that the volunteer system isn’t exactly an “open-door policy.” Many of the volunteers are family members of victims who appear on the page. Still, to avoid family members having to relive the violence-related trauma of losing someone to murder, Emcays said, only a small amount of volunteer work is assigned to them.

Emcays added that he is working to grow his volunteer base, preferably with people unrelated to victims posted on his website.

Emcays said that he often advocates for family members of victims, adding that their pleas to city and law enforcement officials and their quest for justice often go unanswered.

One of Emcays’ future goals, he said, is to persuade the city to erect monuments for Chicago’s murder victims. The act of creating a monument, he explained, would hopefully compel government officials to address the systemic issues that help fuel Chicago violence.

“That’s sort of what Never Forget is about, forcing the community and the city to acknowledge the situation,” he said.