Portraits of Life: Say Her Name; Say All Their Names

By John W. Fountain
HER NAME WAS Reo. Reo Renee. Reo Renee Holyfield. Say her name. Say all of their names. Dispel this cloud of enduring shame. And remember their lives, despite the pain. Let us lift them beyond the realm of invisibility. To speak even from their graves to the dearth of human civility here in this city where they were slain with no indemnity.
Where their killers mostly remain unpunished, unnamed, unfound or free. And there remains no sanctity. For the lives of women poor Black and Brown. No collective pubic outcry by this shimmering city where glitz, glam and fortune abound.
No justice for the 51 who now lie forever frozen in time, six feet underground. Or as ashes after cremation.
So for each of the 51, let us invoke this recitation: Say her name. Say all of their names: Angela Marieanna Ford. Charlotte W. Day. Winifred Shines. Brenda Cowart. Elaine Boneta. Saudia Banks. Bessie Scott. Gwendolyn Williams. Jody Grissom.
_____________________
_____________________

“It’s fire on the inside. I’m still feeling it like they just told me the news the other day. I don't think it’s going to go away.”

-Ricardo Holyfield, Reo's cousin
_____________________
_____________________
Loraine Harris. Dellie Jones. Celeste Jackson. Nancie Walker. Tarika Jones. Linda Green. Rosenda Barocio. LaTonya Keeler. Reo Renee Holyfield… Say their names.
“The media’s blatant disregard for minority victims of violence has reverberating consequences on a number of levels,” writes Cheryl L. Neely, author of “You’re Dead So What? Media, Police and the Invisibility of Black Women As Victims of Homicide. “First, it is clear that when society cares about victims of crime, and can empathize with their experience, the result is public outrage that has a catalytic effect on police response…”
So say their names. Say all of their names. Reo. Her name was Reo...
Let us remove the stigma. Purge this enigma. Tell their stories beyond the gory details of how they died. Beyond how their bodies were discarded on the city’s South and West Sides.
Make the world to see their humanity. Stop this insanity. This incomprehensible profanity of mainstream media light cast on the mundane while mostly relegating to the shadows this matter so sacred, so consequential. So inhumane.
Say their names. Say all of their names…
Latricia Hall. Lucyset (aka Mary) Thomas. Ethel Amerson. Michelle Davenport. Tamala Edwards. Makalavah Williams.
Precious Smith. Denise V. Torres. Wanda Hall. Yvette Mason. Shaniqua Williams. Margaret E. Gomez. Antoinette P. Simmons. Kelly Sarff. Veronica Frazier. Mary Ann Szatkowski. Theresa Bunn.
Say their names… Say all of their names. For if this many dogs had been slain, the city would arise. If their zip codes were different, would not we all still hear their cries? What if they were not mostly Black but white?
Would we not answer with the sound of fury and righteous indignation? Be more in tune to the reverberations of this tally? Let us now rally. Say her name. Say all of their names…
Hazel Marion Lewis. Genevieve Mellas. Charlene Miller. LaToya Banks. Shannon Williams. Vanessa Rajokovich. Lafonda Sue Wilson.
Quanda L. Crider. Angela Profit. Pamela Wilson. Velma Howard. Diamond Turner. Catherine Saterfield-Buchanan. Valerie Marie Jackson. Lora Dawn Harbin. Nicole Lynell Ridge. 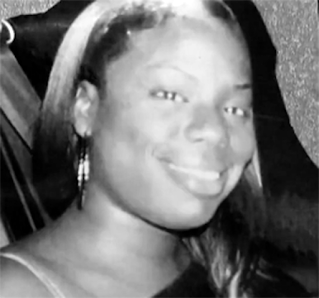 Reo Renee Holyfield…
Some of Reo’s loved ones called her “Chocolate.” Some called her “Auntie.” Riccardo Holyfield, 32, called her his sister, although she was actually his first cousin. Reo was the first girl in the family and Ricardo the first boy. That meant the family doted over Reo, showered her with unrelenting affection. Her aunt, Ricardo’s mother even marked Reo’s arrival with a tattoo on her arm.
Reo grew up in the South Side’s Englewood neighborhood, though as she grew older would ride the train with her cousins to explore the city. She liked to sing. Back in 1993 when “Sister Act 2” came out, Reo would pause the VCR and sing all the songs, serenading her cousins.
“We thought she was Lauryn Hill… That’s how good she used to sing…She could hit them notes,” Ricardo Holyfield recalled fondly. “She could hit all them notes…”
Reo also made the best peanut butter and jelly sandwiches and spaghetti. She was a fighter. A protector. Effervescent in soul.
“She was loved and we miss her,” Holyfield said. “And we’ve got so many things that pass: Thanksgiving, Christmas, her birthday, Fourth of July. Her birthday was in July. We used to treat the Fourth of July like it was her birthday... It was always a big deal.
“Every holiday that has passed since we lost her, that’s the first thing that everybody misses: ‘What if she was here?’”
Reo’s body was discovered on Sept. 10, 2018. A brief Chicago Sun-Times story reported in part: “At 11:27 a.m. Sept. 10, a Chicago Streets and Sanitation worker was dumping a garbage can into the garbage truck when he saw the woman’s body among the dumped garbage in the 500 block of West 95th Street, according to Chicago police and the Cook County medical examiner’s office.”
But this much was clear. She was murdered. Discarded as trash. Her family never got to hold a funeral, to touch a casket, to have a proper farewell -- because her body was so badly decomposed she had to be cremated, Riccardo lamented.
“Right now, to this day, even though she’s passed away and not here, I still talk to her like she’s right here,” he told me. “That’s my sister.
“It’s fire on the inside. I’m still feeling it like they just told me the news the other day. I don't think it’s going to go away.”
And any insinuations, innuendo or questions of whether Reo might have been engaged in a lifestyle or activity that would somehow suggest that she or any of the 51 “deserved” to be killed fuels Holyfield to continue to fight for her name.
Her name was Reo Renee Holyfield. She was 34. She was loved. She is missed. Every holiday. Every birthday. Every single day.
Say her name… Say all of their names.